Home » Looking at Amazonian turtles and the importance of monitoring them

Looking at Amazonian turtles and the importance of monitoring them

Looking at Amazonian turtles and the importance of monitoring them

The turtles of the Amazon, like many other animals, move between aquatic spaces, areas of flooded forests and along the beaches that form on the shores in times of drought. Beaches are particularly important, because they are spawning areas.

Turtles have an important role in the environments where they live, through their ecological interactions, collaborating with the decomposition of nutrients and the dispersal of seeds. In addition, they are very important in the history, in the culture and for the feeding of the peoples of the Amazon. Thus, ensuring that turtles can reproduce is essential for both the ecosystem and human populations.

Currently, turtles are among the most threatened groups of vertebrates, with more than 50% of species in some category of threat. The decline of the group, which has 356 species, occurs mainly due to the loss and fragmentation of their habitats and overexploitation for consumption, for medicinal purposes and for the pet market. In the Amazon Basin, one of the areas with the greatest diversity of the group, the main threat is illegal trafficking for the pet market and the consumption of turtle meat and eggs.

Responding to this scenario, they consider adopting various strategies for the conservation of the group. The main one of these is the monitoring, protection and management of the breeding areas of Podocnemis species, which began in the 70s and were gaining scale, improving with the development of scientific knowledge. This conservation action is quite widespread and seeks to protect the areas where the females spawn, increasing the number of offspring in the wild and reducing human predation on the eggs. 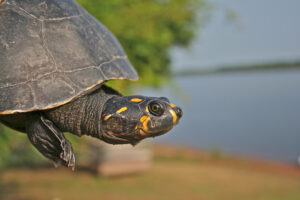 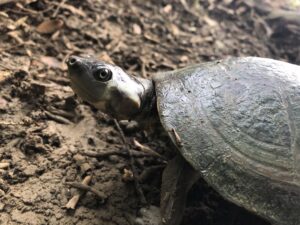 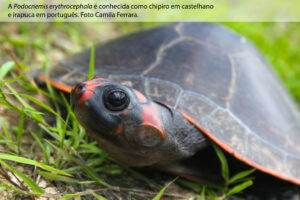 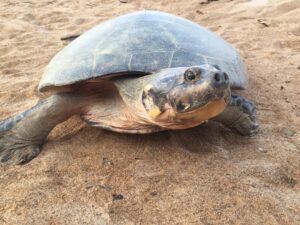 The importance of community participation in conservation

The peoples of the Amazon Basin are protagonists in the monitoring, management and protection activities of spawning areas, having great influence on the success and continuity of turtle conservation initiatives. The monitors, who are beach protectors, take care of the spawning areas from when the mothers lay their eggs until the young are born.

This work can be done voluntarily or rewarded with the monthly donation of food or a salary for the period of the activities. The main task is to protect the reproduction from the people looking for the eggs, whether for their own consumption or for sale. And there is a large record of the decline in that predation. Monitors also keep track of various aspects of the reproduction. In general, they count the nests, the species and the laying date of the eggs. Knowing these dates, it is possible to estimate when the young will be born. At those times, the monitors return to check the nests and record the number of hatchlings, which are still in the sand. The young wait inside the nest for the best moment to emerge to the surface. In cases of hatching in large numbers, the beach is surrounded and an estimate of the offspring is made. If there is a risk of flooding in the area where the nest is, or it is difficult to control human predation, the nests are managed according to technical standards for a more suitable place.

The interest, involvement and participation of the communities in the conservation of the turtles is fundamental not only for the expansion of the geographical coverage and the scale of protection to the places where the turtles make their nests, but also for the awareness of people facing the need for sustainable use and transparency in the management of environmental resources in their territories. 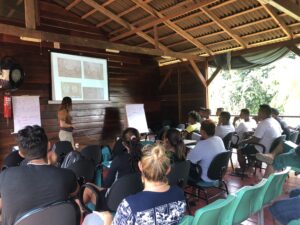 Monitoring with the support of WCS Brazil

The Rio Negro basin, in Brazil, is considered an area of high biodiversity, also known as a hotspot, for the conservation of turtles, because it has all the Podocnemididae species present in Brazil, with very long changes in abundance. These points, together with the pressures on the turtle population, will lead to the creation, in 2014, of a participatory program called Conservação de Quelônios do Mosaico do Baixo rio Negro (Conservation of Quelonidae of the Lower Rio Negro Mosaic). The work has three pillars: protection and monitoring of spawning areas; population monitoring, based on tag-recapture; and monitoring the consumption of eggs and adults based on interviews.

Within the scope of the program, we have the support of 12 communities that protect 16 spawning areas. To date, the program has protected more than 1,300 nests and released more than 12 thousand young of three species of the Podocnemididae family: P. expansa, P. unifilis and P. erythrocephala.

An increase in the participation of the local population in the protection and monitoring of turtle nests was identified in each year of program execution. In addition, with the collaboration of community members, more than 1,200 turtles were captured with nets, tagged and released, mainly P. erythrocephala and P. unifilis in order to carry out analysis of the population structure. The positive results of the program are mainly related to the efforts of the communities.

The monitoring of consumption, led by FVA, is always carried out by the members of all the Unini River communities. The results indicate that, on average, the consumption of turtles is 2,600 per year and of eggs is 9,000 per year. Meanwhile, it was possible to identify that families there began to eat fewer eggs throughout the monitoring and with greater adherence to the Program.

The final objective of the Program is to be able to relate the consumption data with the population and nest monitoring data, to verify the sustainability of the use of the turtles and perhaps discuss consumption quotas with the communities. By increasing the scope of activities for the conservation of turtles, the program became a model for other conservation initiatives and the monitoring protocols designed by its members are used by state entities such as ICMBio.

From the performance of the WCS Brazil team in the Program, it became evident the need to gather and contextualize information, mainly on the taxonomy and distribution of turtle species. In this way, we are motivated to produce a turtle guide from the Rio Negro basin and the Brazilian Amazon.

Management actions and the development of public conservation policies are more effective when they are based on scientific knowledge. These data are often incomplete, unavailable, or fragmented, especially in tropical regions. We believe that the organization and access to specialized information, as well as the identification of knowledge gaps, promote the development of new research and conservation actions for the turtles of the Amazon Basin.

In this sense, “Quelônios Amazônicos: Guia de distribuição e Identificação” gathers up-to-date information on the taxonomy, biology, threats and distribution of turtles. In addition to reporting on issues of uncertainty and divergences in research, proposing priority studies to be developed. The book is available for download, in Portuguese.

Overview of the conservation status of turtles in the Amazon

In this scenario of anthropic pressure, the populations of some species of the Podocnemididae family are decreasing, especially Podocnemis expansa , lewyana and P. unifilis, the first two being listed as critically endangered and the third as vulnerable by the Terrestrial and Freshwater Turtle Specialist Group (TFTSG) of the International Union for Conservation of Nature (IUCN). Podocnemis sextuberculata, P. erythrocephala, P. vogli, and Peltocephalus dumerilianus are also categorized as vulnerable by the group of specialists. In addition, all species of the Podocnemididae family are listed in appendix II of the Convention on International Trade in Endangered Species of Wild Fauna and Flora (CITES) of 2003).

The impacts of illegal consumption and trade of turtle species in the Amazon have been recorded for many years. It is reported that between 1848 and 1859, 48 million eggs were collected each year in the Brazilian regions of the middle and upper Amazon River and in the Madera River.

Currently, the consumption of eggs and adults is very high. Between 1980 and 1990, it is estimated that between 38 and 95 thousand individuals of P. unifilis and 59 to 145 thousand individuals of P. expansa were consumed per year only by rural populations in the Amazon Basin. In the city of Tapauá, Brazil, it is estimated that more than 20 thousand P. sextuberculata are illegally purchased for consumption per year.

There is also a large turtle trade in Peru. In this context, P. unifilis is an important export product as a pet. The export of offspring of this species has grown dramatically since 2005, and in 2015 alone, more than 350 thousand offspring were exported. The control of this trade, as well as studies of possible impacts on wild populations, must be widely carried out to guarantee that exports are kept within legal and sustainable levels. Failure to do so can lead to an irreversible loss of natural resources.

In addition to the exploitation of turtles for direct use by human populations, deforestation and loss of habitats due to agriculture, livestock, extractivism and the construction of large infrastructure works in the Amazon are major threats to the group. These threats generate significant impacts on aquatic ecosystems, which in turn threaten the turtles, with a decrease in the availability of plant matter for consumption and spawning areas, and a change in the sexual proportion of the young.

In the Podocnemididae family, the sex of the young is determined by the incubation temperature of the nests, which is influenced by the substrate where the eggs are deposited and, on a larger scale, by climatic changes. Dams specifically cause the loss of connectivity of populations. Species adapted to specific habitats, such as P. expansa, can disappear in the areas of influence of the dams due to the permanent submergence of the spawning areas. For this species, hydrological alterations due to climate change can decrease the exposure time of the beaches and, consequently, the success rate of the nests.

Biodiversity on the move

New partners of the Citizen Science Network for the Amazon

The piraiba, an unbeknownst giant

Ictio in four years of growth and collaboration!

An impressive migration is interrupted